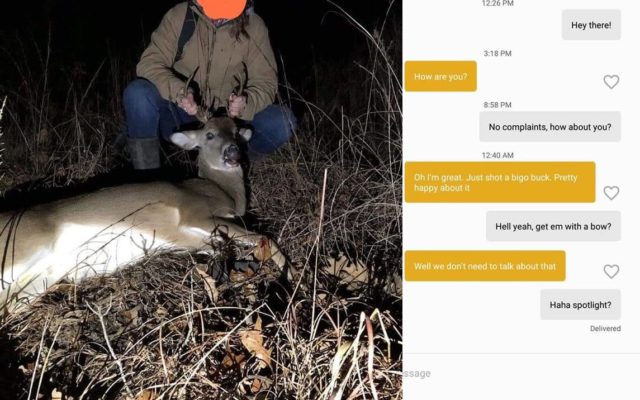 I’m not sure catching a poacher ever gets easier than THIS.

There’s a 24-year-old guy named Cannon Harrison who’s a game warden in McIntosh County, Oklahoma.  And in December, he matched with a woman on the dating app Bumble.

And when he asked her how she was doing, she said she was happy because she’d just shot a, quote, “bigo buck.”  He asked a few questions, and it turned out she really HAD illegally shot a deer out of season . . . and she even sent him a picture of it.

And that was good news for Cannon, since his investigations into poachers usually take months . . . but this one was just served up right to him.

He used the woman’s picture and first name to figure out her identity on social media, and the next morning, game wardens showed up at her house and arrested her.  And she wound up getting hit with a $2,400 fine.

As far as we know, they DIDN’T wind up going on a date.