Double Dipping Versus the Five-Second Rule . . . Which Is Worse? 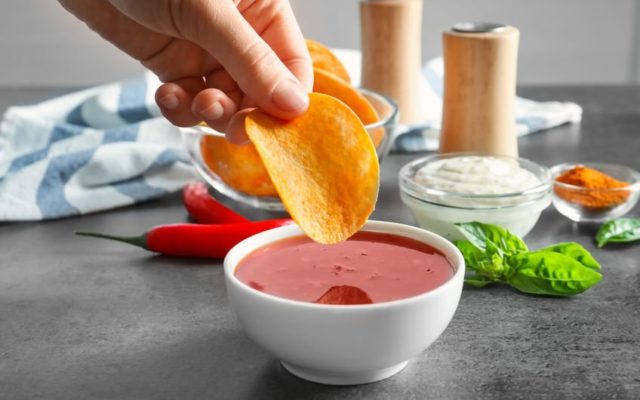 If you double dip a chip, you contaminate the bowl of dip with bacteria.  If you drop food on the ground, pick it up, and eat it thanks to the five-second rule, it’s also got bacteria on it.  But which of those moves is RISKIER?

According to a new study by a food scientist . . . a bowl of dip where someone’s double dipped is filled with MORE bacteria than the average floor.

He found that when you dip a chip into a double dipped bowl, it picks up WAY more bacteria than you would if someone hadn’t double dipped.

And since those are germs that go from person to person, we’re talking things like the cold, flu, coughs, and more.

But when you drop something on the floor and quickly pick it up, it’s actually transferring less bacteria than you think . . . because, quote, “most surfaces are not going to have any kind of dangerous bacteria there.”

One more thing:  Surprisingly enough, he found that when you drop food on CARPET, it picks up fewer germs than on tile or wood floors.  And he says it’s because the carpet actually ABSORBS a lot of bacteria.

HOWEVER . . . The Mythbusters ALSO tested the ‘double dip’ myth and determined there’s likely MORE bacteria in the dip you’re eating than you add by double dipping.

How Do You Wake Up When You’ve Got Low Energy? Coffee, Walking . . . Or Slapping Yourself in the Face?

What’s Not Nearly as Attractive as Guys Think It Is?

What’s the Craziest Habit You’ve Added While Cooped Up During Covid?