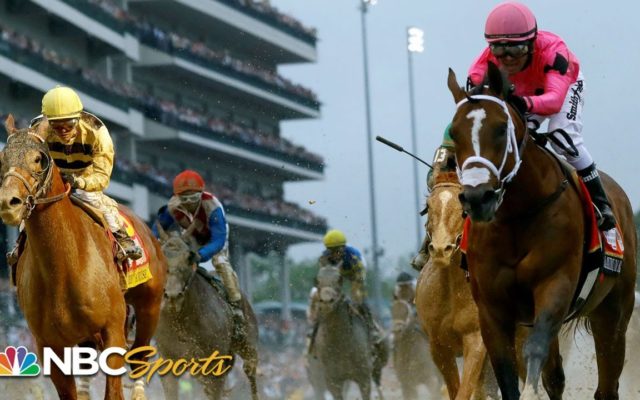 The Kentucky Derby has been around for 145 years, but on Saturday it made history . . . and NOT in a good way.

For the first time in more than 50 years, the fastest horse . . . the one that crossed the finish line first . . . DIDN’T win.  That horse, Maximum Security, was disqualified for swerving into the path of two of the other horses.  That’s a no-no.  Apparently.

So Maximum Security was THOUGHT to have won by a length-and-a-half, but some of the other jockeys asked for a review.  Officials spent 22 minutes looking into it, and ultimately UPHELD the objection . . . disqualified Maximum Security . . . and named the runner-up Country House the winner.

In 145 years, only ONE other Kentucky Derby winner was disqualified.  That was back in 1968, when a horse named Dancer’s Image won . . . but was stripped of his title several days later after the horse failed a post-race DRUG TEST.

This was the first time a horse was ever disqualified on-site, for breaking the rules.

For what it’s worth, President Trump was NOT a fan of the Derby’s ruling.  He Tweeted, quote, “The Kentucky Derby decision was not a good one.  It was a rough and tumble race on a wet and sloppy track, actually, a beautiful thing to watch.

“Only in these days of political correctness could such an overturn occur.  The best horse did NOT win the Kentucky Derby . . . not even close!”

(It’s unclear what the president means by political correctness in this case . . . although it is one of his favorite things to blame, after Hillary of course.)

(Here’s a clip of the final stretch . . . here’s video of the whole race . . . NBC has video of the moment the disqualification was announced . . . and here’s an explanation of what Maximum Security did wrong.)