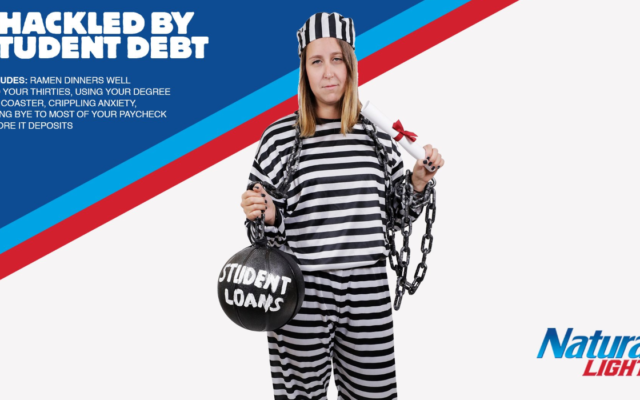 If you’re still working on costume ideas, here’s some extra incentive to get creative for Halloween this year . . .

The makers of Natural Light are doing a costume contest on social media.  And the person with the best ‘real-life nightmare’ costume will win TEN GRAND.

Here’s what that means:  They want people to dress as, quote, “real-life every day” fears.  And they posted a few examples.

One of them is a woman in prison garb, holding a ball-and-chain with the words “Student Loans” written on it.  So her costume is, quote, “Shackled by Student Debt.”

Another one is a guy in a graduation cap, holding a cardboard box that says, “Moving Supplies.  Mom’s Basement.”  So his costume is, “Moving Back in with Parents.”  (Yeah, they’re really going after the post-college crowd.)

To enter, follow Natural Light on Twitter or Instagram.  Then upload a photo of your costume by November 3rd, along with two hashtags:  “#NattyScaries” and “#Contest”.

All you have to do is post a photo in a horror costume that reflects a real-life everyday fear & include #NattyScaries & #Contest. Grand Prize winner gets 10 Gs! More info here: https://t.co/z0M3JHlNhS pic.twitter.com/lOGdPCU2bs