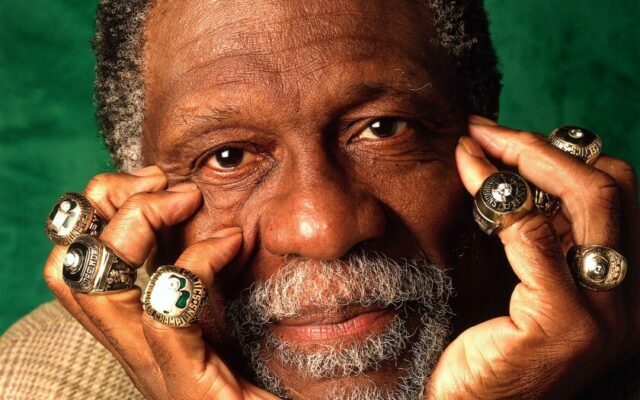 Someone once said that major celebrity deaths come in THREES.  It’s unclear who first said that . . . and if they’re dead, who the other two people who died at the same time were.  (???)

Over the weekend, we lost three beloved celebrity old-schoolers . . .

1.  Nichelle Nichols died of heart failure on Saturday at the age of 89.  She famously played Nyota Uhura on “Star Trek:  The Original Series” and in many of the “Star Trek” movies.

She was one of the first Black women to be featured in a major TV show, and from 1977 until 2015, she volunteered her time to promote NASA’s programs, and to help recruit diverse astronauts, including women and minorities.

(Variety.com has more on Nichelle.)

2.  NBA legend Bill Russell died yesterday at the age of 88.  A cause of death wasn’t released . . . but he was not well enough to present the NBA Finals MVP trophy back in June because of a long illness.

Bill was the cornerstone of the Boston Celtics dynasty in the 1960s that won eight straight titles and 11 overall during his career.  He was a player-coach his last few years with the Celtics, and also later coached the Seattle Supersonics and the Sacramento Kings.

In 2011, President Obama awarded him the Presidential Medal of Freedom for his accomplishments on the court and in the civil rights movement.  (ESPN.com has more on Bill.)

3.  Actress and comedian Pat Carroll passed away of pneumonia on Saturday at the age of 95.  She’s best known for providing the voice of Ursula the Sea Witch in Disney’s original, animated “The Little Mermaid”.

That’s her singing Ursula’s big number, “Poor Unfortunate Souls“.  She also made many appearances on TV . . . everything from “The Carol Burnett Show” to “ER” . . . and did several Broadway shows.  (Deadline.com has more on Pat.)