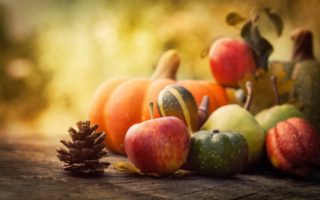 It’s November, if you can believe it.  And obviously we’re all counting down to Thanksgiving in a couple weeks.  But here are six MORE things to look forward to this month . . .

1.  We set the clocks back this Sunday morning at 2:00 A.M.  So enjoy your extra hour of sleep Saturday night.

2.  Some movies hitting theaters include “Terminator: Dark Fate”, which is out today . . . “Charlie’s Angels” on the 15th . . . and “Frozen 2” and the Tom Hanks–Mister Rogers movie “A Beautiful Day in the Neighborhood” on the 22nd.

3.  The Disney Plus streaming platform launches on November 12th.  And they’re premiering several new shows, including “High School Musical: The Musical: The Series” . . . “Forky Asks a Question”, which is from Pixar . . . and “The Mandalorian”, a live-action TV series set in the “Star Wars” universe.

They’ll also be releasing a live-action adaptation of “Lady and the Tramp”.

4.  On TV, some shows you might want on your radar this month include “The Little Mermaid Live!” special on ABC this coming Tuesday . . . the premiere of the Dr. Seuss series “Green Eggs and Ham” on Netflix next Friday the 8th . . .

The 3rd season premiere of the Netflix show “The Crown” on the 17th . . . and Dolly Parton’s Grand Ole Opry special will air on NBC on the 26th.  There will also be a ton of holiday specials airing throughout the month.

5.  There aren’t a ton of big sports events this month, but the Major League Soccer championship game will be played on November 10th.  It’s down to Seattle and Toronto . . . and you can catch it on ABC.