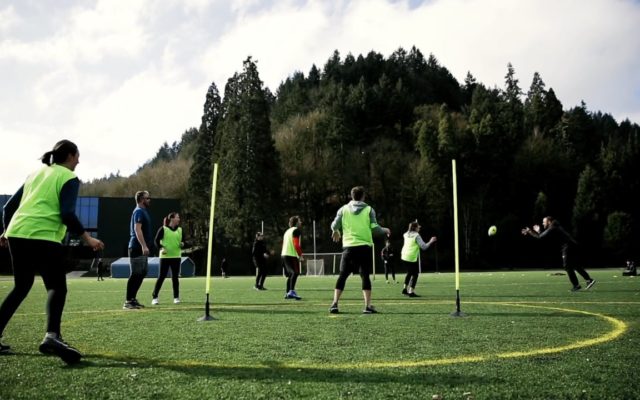 A.I. just invented its first new SPORT by analyzing data on 400 existing sports.  Then it spit out a bunch of NEW sport ideas . . . and most of them were bad.

There were a few good ones though, and researchers decided a sport called SPEEDGATE was the best.  It kind of looks like a combination of rugby, ultimate frisbee, soccer . . . and maybe a little Quidditch?  Here are the basic rules . . .

1.  Each team has six players.  You use a rugby ball.  And when you have the ball, you can’t move, just like ultimate frisbee.  So you either have to pass it, or try to score.

2.  The field is 180 feet long, with goals at each end called “gates.”  Each gate is just two posts sticking out of the ground.  And you score by kicking the ball through from either direction.  So from in front of the gate, or behind it.

3.  There’s also a gate in the middle of the field.  And it’s important, because you have to kick the ball through that one FIRST, before you can score.  So it unlocks scoring.

4.  When you DO score, each goal is worth two points . . . or three if a teammate catches the ball and kicks it BACK through the gate.  (Confused yet?)  And each game has three 7-minute periods.  Then at the end, the team with the most points wins.

The A.I. even created an official logo of a robot playing it.  And it came up with the TERRIBLE motto:  “Face the ball to be the ball to be above the ball.”  You can check out the full rules at PlaySpeedgate.org.  The first intramural league is in the works in Oregon, and could get started this summer.