The World’s “Most Admired” Men and Women 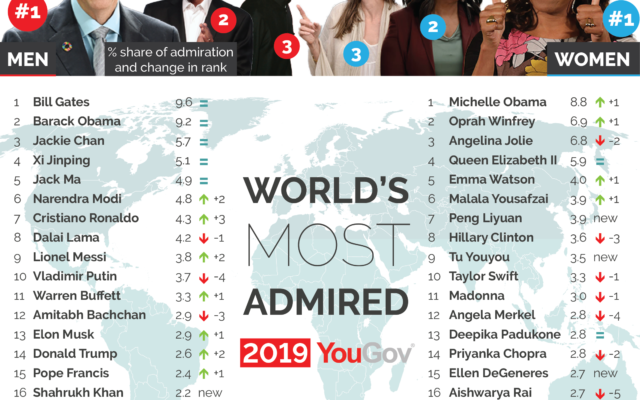 YouGov.com has released its annual list of the world’s “most admired” men and women . . . and thankfully, it isn’t silly stuff like Kanye West, the Kardashians, YouTubers, Korean boy bands, and the “Old Town Road” guy.

It’s mostly world leaders, innovators, influential thinkers, plus a few superstar athletes and entertainers.  To come up with the list, they talked to more than 42,000 people in 41 countries.  Here are the World’s 10 Most Admired Men:

The World’s 10 Most Admired Women are:

The Top Five women for Americans are:  Michelle Obama, Supreme Court Justice Ruth Bader Ginsburg, Melania Trump, Ellen, and Queen Elizabeth, which is weird.  Why does she matter that much to Americans?  (YouGov)